After the train wreck that was Southern Charm Savannah, I’m not expecting a whole lot from the New Orleans version of the franchise, but I’m giving it a shot because at the very least it has to be better than Savannah, right? Wrong. The first episode was BO-ring. At least Savannah had the contrived antics of Ashley to snark on; so far, New Orleans has nothing.

The show begins with a super-sized intro before the credits roll, and then we meet the members of the cast. First up is Tamica, a morning show anchor who is married to Barry, an “entrepreneur.” I’m always leery of people who call themselves entrepreneurs–it seems like a convenient euphemism for doing a whole lot of nothing or shilling cheap clothing lines a la “She by Sheree” or “Alexis Couture,” but we’ll see. Tamica is the daughter of the late Bivian Lee, Jr., a former quarterback for the New Orleans Saints, so she is probably pretty connected in that town.

After running their two kids around all day, “entrepreneur” Barry picks Tamica up from work and they head over the 24-mile Pontchartrain Causeway to Reagan and Jeff’s house. Jeff played in the NFL for seven years, four of which were spent with the Saints. According to Reagan, her family has been in New Orleans ever since there has been a New Orleans. Her ancestor created bitters and invented the Sazerac, which Reagan says is the official drink of Louisiana. She greets Tamica and Barry with a couple of Sazeracs and the four of them head out to the backyard for dinner–which Reagan has cooked herself. How refreshing. It’s tiresome when people claim to have an aversion to the kitchen, like not cooking imbues them with some kind of aura of sophistication.

Tamica and Reagan have been friends for years and have a sister-type relationship that apparently involves a lot of fighting and making up, which might make for some drama down the road. And when the guys meet for lunch the next day, we learn about another bona fide connection in this group. Justin, who narrated the opening montage, went to high school with Tamica who, according to Barry, views him as a little brother. It’s unclear how everyone knows Jon, a 24-year-old artist who has sold paintings to the likes of P. Diddy, Drake and the Obamas. From the previews he seems like a douche, but it’s early yet. 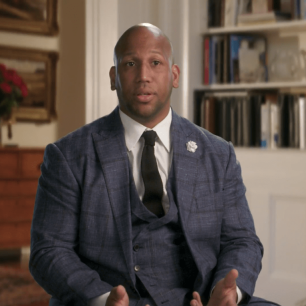 It’s Mardi Gras time, and everyone talks about how great it is, except for Barry, who hates it. He feels like a mouse caught in a trap with all the street closures, crowds and other constrictions. I wonder if he’ll get something worse than beads thrown at him after this episode airs.

The most interesting thing about this episode so far is Reagan’s friend Nicelle’s house.

Justin is a lawyer-cum-sports agent whose father is a judge and mother is a prominent philanthropist. He is moving in with them while his own house–which his parents own–is being renovated. Justin has a girlfriend who may or may not move into his parents’ house with him, and I have to wonder where she lives now. Why would a grown woman move into her boyfriend’s parents’ house for a temporary stay? Maybe this is a setup for conflict between Justin’s girlfriend and his overbearing mother.

I’m so bored. Nothing but exposition is happening in this episode, but it’s the first episode so I’ll give it a break and try to identify areas of potential drama:

Since Justin thinks Tamica is still as “fine” as she was in high school, maybe there will be tension between the girlfriend and Tamica. Or Justin and Barry.

When the ladies get drunk at the Mardi Gras parade while the guys stand around for 6 hours waiting to see their float go by, we learn that Tamica and Barry don’t have sex. Will their marriage hit the skids?

Reagan wants to get an apartment in town while she finishes her third year of law school. Jeff thinks they’re both going to live there, but Reagan apparently wants to him to stay in their house. Will their marriage hit the skids?

Tamica doesn’t approve of Reagan’s plan and thinks it’s bad for her marriage. Since Tamica doesn’t have sex with her husband, Reagan doesn’t think she should be dispensing marital advice. Can their friendship survive?

Jeff’s mother stole a few hundred thousand dollars from him by posing as his wife (eww!) and forging a bunch of documents. When Jeff confronted her about it, his whole family cut him off. Hopefully Jeff’s family is a bunch of malevolent inbreds straight out the bayou and we’ll get to see them in all their slack-jawed glory.

All I have to say about Southern Charm New Orleans is that I hope it gets better, but I’m not holding my breath. Until next week…